This surgery makes you notice the weirdest things. For example,  if you haven't heard of Epic Meal Time, take a look at their videos.

All I can think of is, "How dangerous is it to have your jaw open that wide?"  Is that weird? I'm still fairly conscious when I eat to not open too wide and put pressure down. My bone is probably fully healed for the most part too. It's going to take some time to unlearn that feeling.

I also am worrying in the back of my mind about my numbness. It's about 5 months and I'm still really numb on my left side. My surgeon used this little tool and tapped my left side of my lips and I felt very little sensation, and then when he tapped my right side I got a crazy poking pain. Big difference on one side than the other, and he just assured me that it's going to take time. Okay. I saw my ortho and just got different wires again. My top row teeth are starting to open up a little bit, so the wires are going to fix that.

I've also noticed my top teeth and bottom teeth don't exactly line up nicely. OP told me that perhaps there's this issue where the size of my teeth are pretty big and therefore it creates a different orientation for my teeth. Something to live with.

I notice the feeling come back to me randomly at times when I'm walking to class. It's best described as: Walking into a spider web and it landing on your chin. It's there and annoying, but you just touch it and realize there is no spider web, just your dumb chin.

Lastly, I put on chapstick for the first time today(I usually just use hand cream) and whoa, it feels really weird. I recommend trying it and seeing what spots on your lips you can feel. This is probably my new way of checking where I'm at and keeping the lips not dry haha. Try the Chapstick Test! 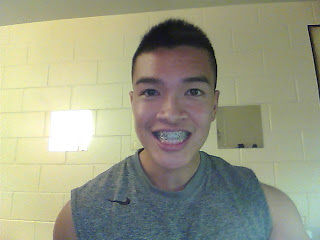 School is in full swing right now and things have been pretty hectic. Here are some updates at day 150(yeah, day freaking 150.)

Status of the jaw itself
- Still numb in places. My left side of my chin(where more asymmetry was fixed) definitely still has a deadness to it compared to my right. Good news is that when I touch it at different angles, the sensation is indescribable, I'd say it's most compared to knocking your funny bone on the elbow.
- Other parts that are numb include both sides on the cheeks under the eyes, compared to my left chin it's nothing
- My upper lip/middle part of the nose(the part that splits your 2 nose holes, I have no idea what that's called) tingles when touched.
- In summary, this has been my numbing situation for quite a while and it seems like it will take some time go away.
- Eating has been excellent, my stomach is still quite shrunken and is taking some time to increase. I can chew pretty much everything, but I am always really conscious when I bite into crunchier things. No, eating is not perfect yet and I'm roughly 5 months in.

Now I went to the orthodontist a while back(2 weeks ago) and was basically given bad news. My teeth are perfectly straight. However, there is still some alignment to do. I popped the question. "How much longer do I need braces for?" The answer - "Until summer."      ****!

They say that they can only move my teeth at a certain speed so that the bones can calcify accordingly. I don't really have an opinion on that, but I know that every time I get a new wire I don't get any soreness or barely any indication that much more movement is needed. So, it's basically a waiting game. It also sucks that I'm in 4th year university rocking braces but it could be worse. Keep calm and carry on. Right? Right?

It's been, just, weird. I get weird looks almost everyone that I reintroduce myself to. I didn't think I'd have to refer to my jaw surgery so many times but usually that's been the case. It's either: new braces? new haircut? skinnier? taller? younger? Why are you different? They've all been weird. People I've met this year obviously don't have that and therefore it has been somewhat refreshing. I feel like this whole journey has started a new chapter in my life. Coming out of surgery I've lost a lot of my cockiness and have been somewhat humbled. Warning: Lots of time to self-reflect when sitting in a reclining chair may do that to you. I feel like a new person. Much more laid back than I was before. Weird.

Anyhow here's a picture. I plan on doing a video at the 6 month mark. 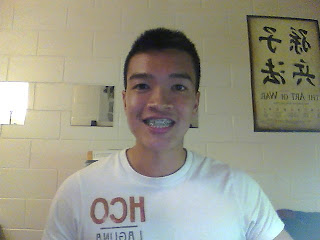