I added a page dedicated to recovery tips. It's pretty much just straight pointers to recovery and things that may help someone adjust themselves for the better. It's very much an ongoing work in progress.

I have very few regrets about this surgery. One of them however is that the chances of me sampling one of the world's greatest foods are at peril. I don't know if I will be fully healed to eat it in time. I am, referring to the limited time only:

2 pieces of breaded chicken over bacon and cheese. Kentucky Fried Chicken has for once in its lifetime served a higher purpose. It's here for a little while longer, I just hope my jaw is fully healed in time to open my mouth wide enough to fit this in. (No, cutting it into tiny pieces is unacceptable.) My recovery is going very well and day to day activities are probably the same to what they were before surgery. The only problem is that my mouth still isn't opening very far and it's still difficult to close down on food. If I try and chew too hard, my ear has a small popping sound in it. My guess is that the joint is not yet adjusted to the new position of the jaw and moves when I chew on something creating any pressure. Here's a picture of my current progress. 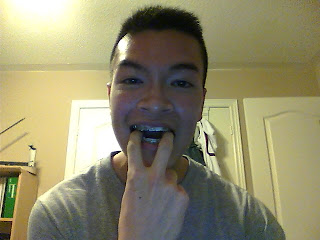 As you can see I can just get one finger into the side of my mouth. While there are many foods which can fit into that space, the soft foods are still what I prefer because it's easier on the jaw.  The two foods that I have recently been going consistently with are: Kraft Dinner, and Mr. Noodles. I thought it was a phase during University but it has returned. The benefits of these foods are just unbelievable. The most obvious is that they are soft enough to fit into my mouth when I am starved. The noodles consistently work its way into your mouth when you are in an unsatiated swallowing frenzy of food. In addition to what seems like an endless supply of starch, it's tasty, cheap, easy to make, and easy to modify. That's a bunch of pros. I also haven't gotten sick of it because I've learned adding an egg to mr. noodles near the end of boiling can add a yolk sac to the noodles which makes it really tasty for actual beneficial nutrition. I've also pulled out my old tricks from 2nd year uni and add various seasonings to my kraft dinner like: Montreal steak spice, Roasted Garlic and Peppers, and the taste never disappoints. I guess I will never evade these foods.

Also, if anyone has seen that Adam Sandler movies " Just Go With It" there's a scene where Adam is at a party and talks to Kevin Nealon who's gotten plenty of botox done to his face. He said he can't feel anything from his eyes down and I suddenly realized how familiar that sounded. When he started laughing it sounded like he was making this retarded cat like noise, and when he drank water it ran right down his face. I couldn't breathe after that scene, would totally recommend watching it.
Posted by Gordon at 19:36

It's limited up there in Canada? I think it's pretty much a permanent menu item down here in the States now, so you could probably just take a long trip if you really wanted one.

Anyway, I'm also making a list of foods I'm going to chomp down on once I can eat normally again. Been searching for best "this" lists for different foods, both my weight and wallet are gonna hate me.

Yeah the double down came in before temporarily and is back again. I've been to the US plenty of times but I'm always looking at having other fast foods rather than KFC.

I'm afraid I have scattered foods I have eaten amongst my posts, so I can't really help ya out. One thing I find with the foods I am eating now is that I am eating tons of carbs(potatoes, pasta, etc.) and not as much protein. If it wasn't for eggs and protein shakes things would be more difficult. Good luck with your recovery!

Do you remember when you were allowed to chew? I'm 4 weeks post-op (with Tocchio) and had lower jaw surgery only. My opening is still extremely limited, and I haven't been chewing. I'm hoping at the 4 week appointment (on Friday) I can start to chew.

Also do you remember when you were allowed to take the elastics off?

Sorry for the late reply, I'm assuming you have had your appointment already.

I was pretty much allowed to chew whenever I was ready.

I had a splint(you may/may not have one with only lower jaw) and that was in for 10-12 days keeping me from eating for sure. To be honest nothing was really 'chewed' until 5-6 weeks in, and when I say chew, I mean forcefully open and close my mouth until it sort of broke/swallowed food whole.

Even though Dr. Tocchio gave permission to eat early, you eat what you can based on how you can move your jaw. No matter how hungry you are, avoid forcing yourself to eat things out of your range until you can. The pain is temporary!