So I had surgery yesterday, and am now officially Kanye wired shut. I am freaking chimpanzee large and it feels weird being not able to move the jaws. 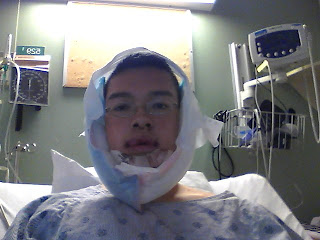 It's difficult when for the past 24 hours all I have ingested is water and apple juice.

Personally, I have perennial year long allergies and I find it difficult breathing through my nose. Last night was difficult since my mouth has swollen up and you became more reliant on nasal breathing. Falling asleep took a while and I was up for at least 5 times to change my facial ice pack as you can see in the picture.

So far, I've been on codeine, tylenol, and acetaminophen to my knowledge. I'm also taking some red liquid for my allergies but nothing for my nose has made a difference.

The surgery was a success to what I know. I had everything described in my first post, and in addition genioplasty(chin) because I had a bit of a long jaw. I was also happy to hear that my minor deviated septum would be fixed as it originally used to curve a bit downward to the right. Looking at my nose however in my peripherals, I can say that it has gotten super pointy with my top jaw which has moved forward. Looking in the mirrror it has definitely stuck out, and I assume that may go away with the swelling over time.

Pain is not too bad. Out of 10 I probably have drifted from a 3-6 over time but nothing that really hurt. Breathing through my nose is the biggest issue, and trying to clear out phlegm is an almost impossible task. I still haven't figured out how it is done.

Anyways, I will try my best to update this site and my experience. It's certainly very interesting!
Posted by Gordon at 09:59